Einthoven triangle is a conceptual idea which comes in Bio medical Science. This concept is used for ECG interpretation as it makes an underline platform to determine resultant electrical axis of the heart. If you have a basic knowledge in ECG interpretation this short wordings would not be a matter of wasting time, i believe.

To have a nice explanation on axis determination in ECG have a look at below article. 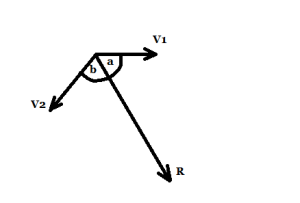 One of the other misinterpretation (which i also came through) is interpreting the resultant electrical axis using the above triangle. Actually a fascinating feature of this triangle is that two leads’ electrode magnitudes are more than enough to get done the work under this topic. But the resultant won’t come as we think in basic physics. This is a point where the most of the confusion comes alive. Look at the example provided herewith to grasp the idea.

Working backward would not be possible if we could not construct the picture in mind. (provided there are other methods as well). Only tricky part here is to determine the angles ‘a’ and ‘b’.

More precisely the Einthovens concept comes in to play under above conception. To determine the resultant electrical axis of the heart using Einthovens triangle is not just a calculation of resultant vector of lead vectors. One main thing that we have to keep in mind is that the Einthovens law is an scalar addition and not a vector addition. But in the calculation of the resultant electric axis the characteristics of vector should be considered. Therefore the above two calculations are deferred in their very nature.

Resultant of the Einthoven triangle is calculated as follows.

The resultant deflections are plotted on the Einthoven Triangle as vectors, appropriate units are used to represent the millimeter or millivolt height of each deflection. Each vector is drawn along the side of the triangle corresponding to the lead it represents.  The vector is drawn from the centre of each side and toward the (+) pole or electrode.  If Einthoven’s law is valid, perpendicular lines dropped from the point inside the triangle.  A line drawn from this intersection to the centre of the triangle represents the electrical axis of the heart.  The position of this axis is measured in degrees from the horizontal line drawn through the centre of the triangle (see below).  The length of the axis vector is a measure of the overall electrical potential of the heart in the axis direction. 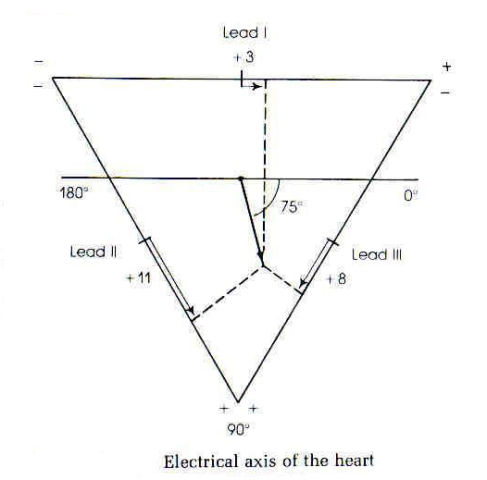 As depicted above the resultant electric axis of the heart can be found using the three Bi-polar limb electrodes. One last thing that should be noted here is as I suggested at the beginning of this article, for the determination of resultant only two BI-polar vectors are enough. And calculating the resultant axis using only two vectors can be used to derive the remaining lead vector from characteristics of vectors and hence can prove the law of Einthovens.

Hope things went fine. I am pleased to accept any views of you upon this article. Nice day!

“If we look inside the atom, any atom, we will see a sun in its core.” – Ali ibn Abi Thalib 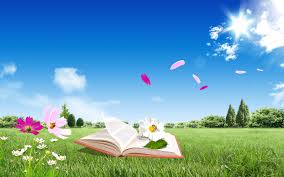